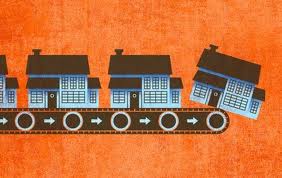 For weeks now, most State Attorneys General have been touting the $25 Billion mortgage settlement as a huge win for consumers.Â  Wrong!

Neil Barofsky, former Special US Treasury Department Inspector General,Â explains in detail how the settlement is a “bad deal” for consumers, and nothing but “games and fluff”.Â  Here is the video.

How is the settlement games and fluff?Â  The State Attorneys General claim that the mortgage settlement helps homeowners by seriously addressing underwater mortgages – a serious roadblock to economic recovery.Â  But the devil is in the details.

The underwater mortgage relief is in the form of $1.78 Billion in “credits” against deficiency judgments.Â  But,Â a deficiency judgment only occurs once a home is foreclosed upon and taken away from the homeowner.Â  This means that most of the underwater mortgages that see relief are no longerÂ held by the actualÂ homeowners – they have already been foreclosed on and are in the banks’ possession.

But it gets worse.Â  In theory, the credits prevent the banks from seeking the deficiency – the difference between the judgment and the total mortgage debt – from the homeowner.Â  However, in reality, it is extremely rare for banks to actually pursue deficiency judgments.Â  In other words, by giving the banks money they would not have otherwise pursued, the mortgage settlement just gives the banks $1.78 Billion in “free money”.

The games do not end there.Â  The Attorney Generals touted the settlement’s fines as serious, tough sanctions.Â  However, the fine against Ally Bank (formerly GMAC) was reduced!Â  Why?Â  Because Ally/GMAC said it could not afford the fine it originally agreed to.Â  Absurd.

The final kicker has to do with the payments under the settlement.Â  First, of the $25 Billion, only about $5 Billion is actually paid in the form of cash.Â  The remaining $20 Billion is “paid” by way of the bogus “credits” discussed earlier.

Second, the money that actually is paid does not even target the fraudulent banks.Â  On paper,Â it seems that theÂ banks are paying money.Â  However, in reality, most ofÂ the money is coming from the banks’ innocent investors.

In summary, the $25 Billion mortgage settlement is a joke, and lets Wall Street banks get away with fraud scott free.Â  The former US Treasury Inspector General hit the nail on the head when he stated, “The governmentÂ raised the white flag and is surrendering to the banks, and just accepting that a certain amount that will profit the banks and punish the homeowners is just totally acceptable.”